How quality is defined...

The Akita is a large-sized dog with sturdy build, much substance and a heavy bone structure. A fully grown dog measures around 66-71 cm and weight approximately 45-55kg. Bitches stand around 61-66cm tall and weigh between 35-45 kg as an adult.

The breed's thick double coat can be any color, including white, brindle or pinto. It also sports the signature spitz curled, plushy tail that curls over its back.

An Akita barks seldom and the broad head, forming a blunt triangle, with deep muzzle, relatively small eyes and erect ears, carried forward almost in line with the back of the neck, is characteristic for the breed. 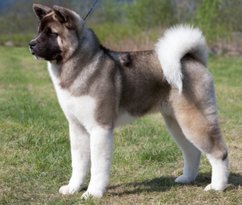 are the norm in the breed, they are accepted for dog showing. Even though they are called short haired, Akitas always have a lot of fur. 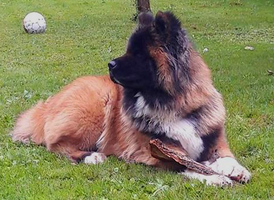 are considered a genetic flaw and are not allowed at dog shows. They are however amazing family dogs and bring a very unique look that a lot of people love. 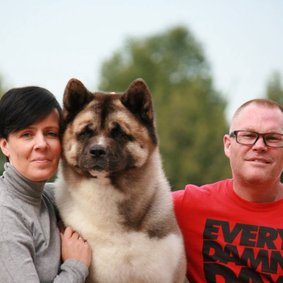 The American Akita is intelligent, calm and self-confident and is quite hard to impress. It bonds very strongly with its family and often ignores strangers. Large, powerful and alert, the Akita is a working breed that originated in Japan. Dignified and courageous, the Akita today is popular in the show ring and also participates in performance and therapy work.

Akitas are an independent breed, but most have a silly side reserved only for those people they know, love and trust. They do require being a part of a family and should never be a trophy relegated to the back yard. Their excercise level is medium. They will be happy with a good walk or jog, and ar e not an overly hyper breed.

Akitas are generally quiet and not prone to annoying barking. Despite their quiet nature, they are natural guardians. They do not need and should not have special watch dog training. The Akita will instinctively guard your home, which is one of the reasons they require extensive socialization. They need to learn that not all strangers are threats.

This is a breed that requires respect, from family, friends and strangers; a hard concept for some people to grasp.  This does not mean that people should be afraid of an Akita - it means that they should treat them as the beautiful, noble breed they are, giving them their space and respect, not forcing themselves on the dog.

AN AKITA IN THE FAMILY

THE AKITA WITH OTHER DOGS 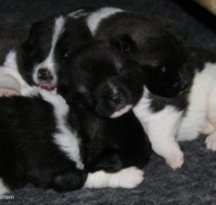 The Akita can be very dominant towards other dogs of the same sex. This can mean that an Akita can never be let alone with other animals in the household. While training and early socialization can help, there is no guarantee that your Akita will ever be friends with another dog of the same gender.

Please see the video below, where Beverly Vics explains the visual requirements for the AKC Standard.

The full breed standard used to judge in the US can be found at the American Kennel Club. The european breed standards are similar but at the same time a bit more lenient (no disqualifications).

Further information can be found at:

History of the Akita

In the beginning, the history of the American Akitas is similar to the history of Japanese Akitas. Since 1603, in the Akita region, Akita Matagis (medium-sized bear-hunting dogs) were used as fighting dogs. From 1868, Akita Matagis were crossbred with Tosas and Mastiffs. Consequently, the size of Akitas increased, but characteristics associated with Spitz type were lost. In 1908 dog fighting was prohibited, but Akitas were nevertheless preserved and improved as a large Japanese breed. As a result, nine superior examples of Akitas were designated as «Natural Monuments » in 1931.

During World War II (1939-1945), it was common to use dogs as a source of fur for military garments. The police ordered the capture and confiscation of all dogs other than German Shepherd Dogs used for military purposes. Some fanciers tried to circumvent the order by crossbreeding their dogs with German Shepherd Dogs. When World War II ended, Akitas had been drastically reduced in number and existed as three distinct types : 1) Matagi Akitas 2) Fighting Akitas 3) Shepherd Akitas. This created a very confusing situation in the breed. During the restoration process of the pure breed after the war, Kongo-go of the Dewa line enjoyed a temporary, but tremendous popularity. Many Akitas of the Dewa line, which exhibited characteristics of the Mastiff and German Shepherd influence, were brought back to the United States by members of the Military Forces.

The Akitas from the Dewa line, intelligent and capable of adapting to different environments, fascinated breeders in the United States and the line was developed with increasing number of breeders and a great rise in popularity.

The Akita Club of America was established in 1956 and the American Kennel Club (AKC) accepted the breed (inscription into the stud book and regular show status) in October 1972. However, at this time, the AKC and the JKC (Japan Kennel Club) did not have reciprocal agreements for recognizing each other’s pedigrees and therefore the door was closed for the introduction of the new bloodlines from Japan. Consequently, Akitas in the United States became considerably different from those in Japan, the country of origin. They developed as a type unique in the United States, with characteristics and type unchanged since 1955. This is in sharp contrast with Akitas in Japan which were crossbred with Matagi Akitas for the purpose of restoring the original pure breed.

The Akita is one of Seven Breeds designated as a National Monument in his native country of Japan. Bred as a versatile hunting dog in the rugged mountains of Northern Japan, the breed is a wonderful combination of dignity with good nature, alert courage and docility.

There is a spiritual significance attached to the Akita. In Japan they are affectionately regarded as loyal companions and pets, protectors of the home and a symbol of good health, when a child is born, the proud family will usually receive a small statue of an Akita signifying health, happiness, and a long-life. If a person is ill, friends will send a small statue of an Akita to express their wish for a speedy recovery.

The renowned Helen Keller is credited with bringing the first Akita into the United States in 1937. The breed's popularity in the United States following World War II may be attributed to American servicemen of the occupational forces, who so admired the noble dogs that they took them home to their families. They were attracted to the Akita because of the breed's intelligence and adaptability to different situations. 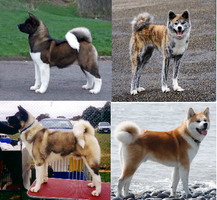 When Keller visited Akita Prefecture in Japan in July 1937, she inquired about Hachikō, the famed Akita dog that had died in 1935. She told a Japanese person that she would like to have an Akita dog; one was given to her within a month, with the name of Kamikaze-go.  When he died of canine distemper, his older brother, Kenzan-go, was presented to her as an official gift from the Japanese government in July 1938. Keller is credited with having introduced the Akita to the United States through these two dogs.By 1939 a breed standard had been established and dog shows had been held, but such activities stopped after World War II began.

"If ever there was an angel in fur, it was Kamikaze. I know I shall never feel quite the same tenderness for any other pet. The Akita dog has all the qualities that appeal to me – he is gentle, companionable and trusty."

-- Keller in the Akita Journal

Quality never goes out of fashion

We breed American Akitas with a loving temperament, who are healthy inside and outside.

Or reach out on social media!